Perfetto is an open-source project for performance instrumentation and tracing of Linux/Android/Chrome platforms and user-space apps.
It consists of:

A portable, high efficiency, user-space tracing library
designed for tracing of multi-process systems, based on zero-alloc zero-copy zero-syscall (on fast-paths) writing of protobufs over shared memory.

Processing of traces
A C++ library for efficient processing and extraction of trace-based metrics.. The library accepts both protobuf and json-based traces as input and exposes an SQL query interface to the data. The library is built to be linked by other programs but can also be used standalone as a command line tool.

Web-based frontend
An open-source UI for inspection and analysis of traces. Available at ui.perfetto.dev. The UI is built on top of C++ trace processor library which is cross-compiled to WASM to run locally in the browser. 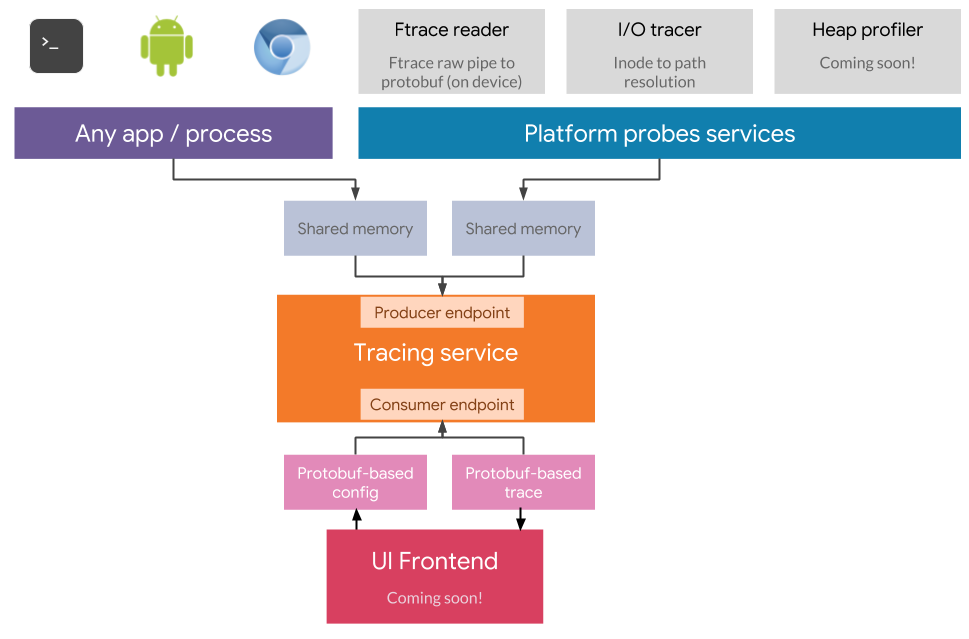 Perfetto is building the next-gen unified tracing ecosystem for:

The goal is to create an open, portable and developer friendly tracing ecosystem for app and platform performance debugging.

Designed for production
Perfetto's tracing library and daemons are designed for use in production. Privilege isolation is a key design goal:

Composability
As Perfetto is designed both for OS-level tracing and app-level tracing, its design allows to compose several instances of the Perfetto tracing library, allowing to nest multiple layers of tracing and drive then with the same frontend. This allows powerful blending of app-specific and OS-wide trace events. See multi-layer-tracing.md for more details.

Extensibility
Perfetto allows third parties to defined their own protobufs for:

Allowing apps to define their own strongly-typed input and output schema. See trace-format.md for more details.